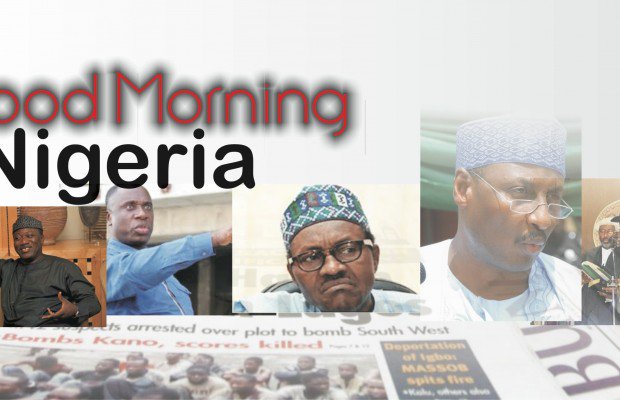 1. Former vice president, Atiku Abubakar, has picked ex-Governor of Anambra State, Peter Obi as his running mate for the 2019 presidential election.
According to the Director General of the Atiku Abubakar Presidential Campaign Organisation, Otunba Gbenga Daniel, Obi’s choice was largely influenced by his youthfulness, vast knowledge of global and local economics, as well as being a financial expert.
2. A High Court in Ekiti State has turned down a request, seeking to stop the Governor-elect, Dr. Kayode Fayemi, from dissolving the 16 local government councils.
Justice Abiodun Adesodun in his ruling on Friday described the application as “unmeritorious, preemptive and speculative,” saying there was no compelling fact in the application to warrant the granting of the order.
3. An aircraft belonging to Overland Airways, parked inside Overland Air hangar at the domestic wing of the Muritala Muhammed Airport in Lagos, went up in flame on Friday.
The inferno also spread to other aircraft, causing damages estimated to be worth millions of dollars.
4. Super Eagles of Nigeria will today take on the Libya national team in the African Cup of Nations, AFCON, qualifying series
Here is Super Eagles potential lineup against Libya: Francis Uzoho Leon Balogun, Troost-Ekong, Jamilu Collins, Abdullahi Shehu, Wilfred Ndidi, Oghenekaro Etebo, Alex Iwobi, Samuel Kalu, Odion Ighalo (Isaac Success) and Ahmed Musa played for the Team A.
Substitutes: Ikechukwu Ezenwa, Ola Aina, Chidozie Awaziem, Kenneth Omeruo, Bryan Idowu, John Ogu, Semi Ajayi, Ogenyi Onazi, Kelechi Iheanacho, Moses Simon, Henry Onyekuru.
5. The Ekiti State Governor, Ayodele Fayose, has presented a handover note to the state’s Head of Service, Dr. Gbenga Faseluka.
The event took place during the special State Executive Council meeting, at the new Governor’s Office in Ado Ekiti on Friday.
6. The leadership of Ohanaeze Ndigbo Youth Council Worldwide, led by Mazi Okechukwu Isiguzoro, has hailed the Peoples Democratic Party, PDP, presidential candidate, Alhaji Atiku Abubakar, over his choice of former Anambra Governor as running mate.
The OYC spoke on Friday through a communiqué issued after its meeting, which was signed by Comrade Obinna Achionye, Deputy President General and Mazi Alex Okemiri Vice President (Ebonyi.
7. The Abia State command of the Nigerian Security and Civil Defence Corps (NSCDC) has confirmed the death of 19 persons, following Friday’s pipeline explosion in two villages in Osisioma Local Government Area of the state.
The state Commander of the organisation, Mr Benito Eze, confirmed the number of casualties to newsmen in Umuahia.
8. Reno Omokri, the former aide to ex-president goodluck Jonathan has attacked Festus Keyamo, spokesman of the reelection campaign of President Muhammadu Buhari for condemning Bishop David Oyedepo’s meeting with Atiku Abubakar
He described the statement by Keyamo as silly, adding that the Bishop could be richer than Atiku hence his visit was not for any financial gain.
9. President Muhammadu Buhari, Friday, in Abuja said his administration remains focused and more energized in ensuring accountability in the country, noting that enforcing the Treasury Single Account (TSA) was not optional for growth.
Receiving executives of the Association of National Accountants of Nigeria (ANAN) led by Alhaji Shehu Usman Ladan at the Presidential Villa, President Buhari said insistence on the financial structure required much sacrifice and focus on the part of the government as “accountability’’ was no longer optional.
10. Former Minister of Aviation, Femi Fani-Kayode, has insisted that whoever former president, Chief Olusegun Obasanjo, endorses ahead of a presidential election, always wins.
According to him, former leaders like Musa Yar’Adua, Goodluck Jonathan and even the incumbent President Muhammadu Buhari, came into power, because Obasanjo took sides with them.